INTRODUCING THE PRESIDENT-ELECT
OF THE
UNITED STATES SECTION
OF THE
INTERNATIONAL COLLEGE OF SURGEONS
FOR THE
TERM COMMENCING JANUARY 1, 2022 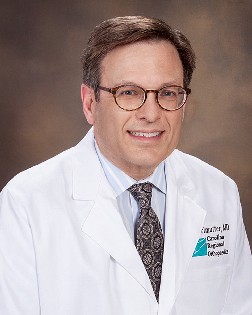 Mark Nicholas Perlmutter, MS, MD is a board certified and hand surgery fellowship trained Orthopaedic Surgeon in private practice. His group’s primary office is located in Rocky Mount, North Carolina where Dr. Perlmutter focuses his orthopedic activities on the treatment of hand and upper extremity related issues. Although he embraces only the most modern surgical techniques, such as minimally invasive hand surgery, he has a strong emphasis on the conservative management of all medical conditions. By combining state of the art medical procedures with the old-fashioned principles of availability, compassion, and honesty in patient care, Dr. Perlmutter has earned a strong reputation for excellence in the community.

As a past participant in numerous medical missions to underserved parts of the world, it was the College’s focus on Global Surgery that attracted Dr. Perlmutter to the organization. Most recently he traveled to Honduras to provide care to those in need. He plans to return as soon as possible acknowledging that there is a tremendous deficiency in surgical care in the region. He has also been very active in the G4 Alliance that aims to bring together organizations with similar interests in Global Surgery. In fact, he won a $40,000 grant from the G4 Alliance on behalf of the International College of Surgeons - United States Section to build the SOTA Registry. The purpose of which is an open-source registry to encourage effective collaborations between global surgical, obstetric, trauma, and anesthesia (SOTA) communities to serve low- and middle-income countries.

Dr. Perlmutter received his Bachelor of Science and Master of Science degrees from the Ohio State University. Subsequently he received his Doctorate in Medicine from Jefferson Medical College of Thomas Jefferson University in Pennsylvania. After completing his Orthopedic residency training at the Thomas Jefferson University Hospital he completed a Fellowship in Hand Surgery at the Jackson Memorial Hospital (University of Miami), Department of Orthopedic Surgery, Division of Hand Surgery. While he has been in North Carolina since 2015, Dr. Perlmutter spent the bulk of his early years in Orthopedic Surgery in Pennsylvania.

Joining the International College of Surgeons in 2011, Dr. Perlmutter immediately became active in numerous ICS activities. His leadership roles began with an appointment as Pennsylvania Regent in 2014. He has been or is a member of the AMA Advisory Committee, Ethics Committee, CME Committee and the Honors Committee. In 2018, Mark became a member of the United States Section Executive Committee when he was appointed the Chair of the Board of Regents. He has also served as the US Section’s Secretary and Treasurer.

Dr. Perlmutter has three adopted children, a son and 2 daughters. He is also anticipating his first grandchild this summer.